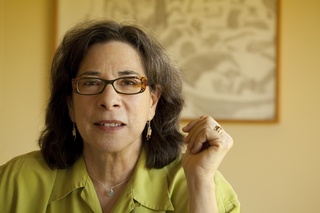 My newest book:
The Mother Who Stayed

"No book could be more beautifully formed or more deeply satisfying . "
—Joan Silber, author of The Size of the World and Ideas of Heaven

"There are no false notes anywhere in this collection, which Furman presents as three 'trios.' . . . . Although each story deepens the others in its trio, each also stands alone. And although time's passing and the losses it brings is a prevailing theme, the stories are also suffused with a deep sense of what abides."

"Furman's prose ambles sinuously, in unexpected directions, and has a quiet, sure effect."

Laura Furman was born in Brooklyn, New York, and educated in New York City public schools, PS 75 and Hunter College High School. She graduated from Bennington College. After college she worked at Grove Press and then as a freelance copy editor for various New York publishing houses and the Menil Foundation.

Her first story appeared in The New Yorker in 1976, and since then work has appeared in Yale Review, Epoch, Southwest Review, Ploughshares, American Scholar, and other magazines. Her books include three collections of short stories, two novels, and a memoir. Her most recent collection is The Mother Who Stayed.

Laura Furman's received fellowships from the New York State Council on the Arts, Dobie Paisano Project, the John Simon Guggenheim Foundation, and the National Endowment for the Arts.

Since 2002, she's been Series Editor of The O. Henry Prize Stories, published annually by Anchor Books. Each year she selects the twenty winning stories and writes an introduction.

For many years, she taught at the University of Texas at Austin, where she is now professor emerita.

Laura Furman lives in Austin with her husband Joel Warren Barna and their son.

The O.Henry Prize Stories
“Widely regarded as the nation’s most prestigious awards for short fiction.” —The Atlantic Monthly